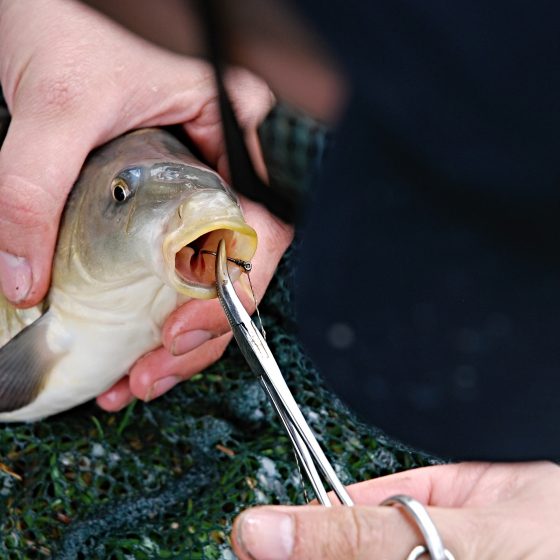 Fishing is a sport, but in recent decades it has become less about hunting for survival and more about entertainment. With the rising issue of fish becoming depleted, many anglers are now employing the practice of catch and release fishing. Catch and release fishing is great in theory, but many people are doing it incorrectly and as a result, many fish are dying. A few steps should be followed when properly executing the catch and release method. Once you get the hang of how to do it correctly, you’ll be able to enjoy your hobby without harming the fish population in your local lake or river.

The best place to start is the hooks. A fish that has a hole through its mouth is going to be more likely to survive than a fish with a hole in its lung or gill. If you happen to hook a fish in the gut, the best thing to do is to cut off the hook as much as you can then release the fish. Many times the hook will dissolve and the fish will spit it out, but they can also live with a rusted hook hanging from them. Whatever you do, do not tug on your line to pull a hook out or you will severely hurt the fish. If you are able to easily remove the hook, use a pair of needle nose pliers. The process of pulling the hook out is easier if you remove the barbs from the hooks, but try not to wiggle while you pull the hook out.

Fish, obviously, are unable to survive outside of the water. Therefore, the longer that it takes you to release them, the more likely you are to suffocate and kill them. The way that a fish is gripped when out of the water will make a big difference. For instance, avoid touch a fish’s body with your bare hands. The fish have a slimy protective coat that will be stripped if you touch them with your hands. If you have to touch a fish, make sure that your hands are wet. You may want to wear gloves to protect your hands from cuts or lingering fish smells.

Part of the fun in fishing is to ‘play out’ the fish. The struggle is what some anglers wait all day to do. Fish are like humans; when they expend lots of energy, their bodies build up lactic acid. When you are fighting a fish, they are fighting too. Just like when someone works his or her body out and it feels sore, a fish experiences the same thing. The buildup of lactic acid can be toxic to a fish even days later. Therefore, if you are going to practice catch and release, try to keep the struggle to a minimum.

Try not to let a fish flop around when you catch them. A fish that flops around can bruise or damage its internal organs, causing them to die later from the injuries that are incurred. You can also revive a fish if you need to do so. A fish is likely to run out of oxygen and pass out, so to speak. In order to revive a fish, you place the fish in the water with their belly down and gently grasp their tail. Start to slowly move their tail back and forth until they give you the signal that they are ready to take off into the water. Sometimes you will need to repeat the process more than once, but don’t let a fish go until they are ready. A fish that is not ready to swim could get carried away and swept into rocks or embankment and cause serious injury.

More than anything, when you are practicing catch and release, have everything ready to go. Make sure that your camera, pliers, and gloves are in reaching distance. Try to take the precautions necessary to preserve fish and one of America’s favorite pastimes.

Raising Fish for Food: A Guide to Live a More Sustainable Life