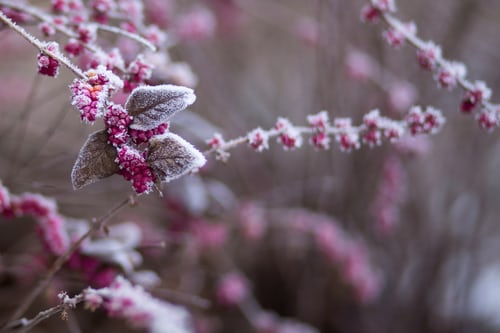 The appearance of wilting leaves, and leaves that have a water logged look can be a sign that your plant is suffering from frost damage.
Another sign of frost damage can be the appearance of brown patches on the leaves.
Other signs are shown when the shoot tips on your plants start to die back.
If the flowers on the plant don’t open fully or they become discolored and then start to die off, then these are also signs that frost damage might have occurred.

There is no treatment for frost damage other than to remove the damaged portions of the plant in an effort to make it look a little healthier.
Provided the damage hasn’t been too severe you might not lose the plant.

Sometimes frost damage is not noticeable for a few days after a frost has occurred and this is particularly so if the frost was a very light one.

The best way to protect against frost damage, or to reduce the effect that frost might have on your garden is to choose the best plants for your climate conditions.
If you are living in an area that is susceptible to frosts then your best course of action is to choose plants that are frost-tolerant.

By planting in areas that are exposed or where frosts occur more frequently you will increase the chances of losing plants to frosts so it is wise to plant in sheltered spots or areas other than where there are frost pockets.

You can offer some protection to your plants by wrapping them in Hessian cloth or frost cloth until after the period of frost has passed.

There will be times in such climates where it is not possible to know when there will be a frost and these out of season frosts can kill a whole plant.