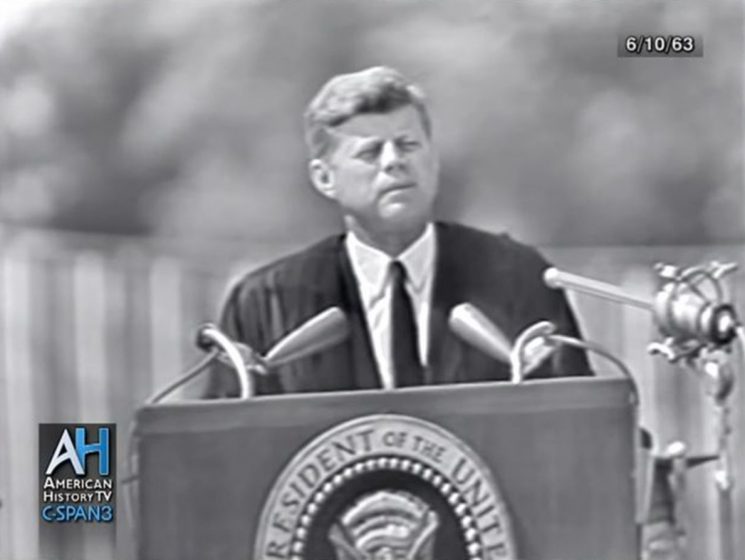 Kennedy was asking us to recognize that the world consists not only of democrats but also of autocrats, dictatorships, military regimes, monarchs and politburos, and the goal of U.S. foreign policy was not to convert them into political replicas of the USA.    Kennedy was willing to put our political model on offer to the world, but not to impose it on anyone…

Seven months after the Cuban missile crisis, President John F. Kennedy, at American University, laid out his view on how the East-West struggle should be conducted to avoid a catastrophic war that could destroy us both.

Kennedy’s message to Moscow and his fellow Americans:

“If (the United States and the Soviet Union) cannot end now our differences, at least we can make the world safe for diversity.”

As George Beebe writes in his essay, “It’s a Big World: The Importance of Diversity in American Foreign Policy,” in the July National Interest, Kennedy later elaborated:

To Kennedy, a student of history, acceptance of the reality of a world of diverse political systems, many of them unfree, was a precondition of peace on earth and avoidance of a new world war.

Kennedy was asking us to recognize that the world consists not only of democrats but also of autocrats, dictatorships, military regimes, monarchs and politburos, and the goal of U.S. foreign policy was not to convert them into political replicas of the USA.

Kennedy was willing to put our political model on offer to the world, but not to impose it on anyone: “We are unwilling to impose our system on any unwilling people — but we are willing and able to engage in peaceful competition with any people on earth.”

The higher goal: “Preserving and protecting a world of diversity in which no one power or no one combination of powers can threaten the security of the United States.”

Have something to say about this column?
Visit Gab – The social network that champions free speech – Comment without Censorship!
Or visit Pat’s FaceBook page and post your comments….

He knew that throughout our history, we Americans had partnered with dictators, monarchs and autocrats when our interests required it.

The 1778 alliance we forged with the French King Louis XVI was indispensable to the victory at Yorktown that ensured our independence.

Woodrow Wilson took us into World War I as an “associate power” of four great empires — the British, French, Russian and Japanese.

In World War II, we allied with Stalin’s Russia against Hitler’s Reich.

The thrust of Beebe’s article is that President Joe Biden, in defining the new post-Cold War era as featuring a new-world ideological struggle, between authoritarian and democracy, is misreading the conflict.

Said Biden, in his major foreign policy address during the campaign: “The triumph of democracy and liberalism over fascism and autocracy created the free world. But this contest does not just define our past. It will define our future.”

“Authoritarianism is on the global march. … We must join with likeminded allies and partners to revitalize democracy the world over.”

Watch the Latest Videos
on Our Buchanan-Trump YouTube Playlist!

Yet, neither of our great adversaries is preaching a global crusade to remake the world in its image.

Communist China does business with Japanese and American capitalists, with South and North Korea, with Arab monarchs and Israelis, with Europeans and Iranians, Africans, Latin Americans and Central Asians, without attempting to impose its system beyond its borders.

Consider Russia. President Vladimir Putin, it is said, is an autocrat.

But Putin’s interest in bringing home ethnic Russian kinfolk left behind when the USSR broke apart is a normal and natural expression of his people’s and his country’s national interest.

So, too, is Moscow’s effort at re-knitting relations with Ukraine and Belarus, the two nations with whom Russia’s ties are the oldest, closest and deepest, culturally and ethnically.

What Russia, a Black Sea power since the 18th century, is doing in Yalta and the Donbas is understandable from the standpoint of history, ethnicity and national interests.

The question is: What are we doing there?

When did Ukraine, Belarus and Georgia become our concerns?

Russia’s alarm at having the world’s largest military alliance, NATO, led by its former Cold War adversary, squatting on its front porch from the Arctic Ocean to the Baltic and Black Sea, is as understandable as is Putin’s impulse to push that alliance some distance away.

That is what any Russian nationalist ruler would do.

But when did relations between Belarus, Ukraine and Russia become the concern of the USA, 5,000 miles away?

Is Putin an autocrat? But so what?

When has Russia not been ruled by an autocrat?

During his speech at American University, Kennedy mentioned a crucial fact about the long history between Russia and America:

“Almost unique among the major world powers, we have never been at war with each other.”

Maintaining that 230-year tradition should be at the apex of our concerns, not how Vladimir Putin rules what is, after all, his country.

Do You Appreciate Reading Our Emails and Website? Let us know how we are doing – Send us a Thank You Via Paypal!

Note: We are an Amazon Associate. Your purchases on Amazon.com via any of our links will help support Buchanan.org – at no extra cost to you!

Are the United States and China Stumbling Toward an ‘Islands War’?