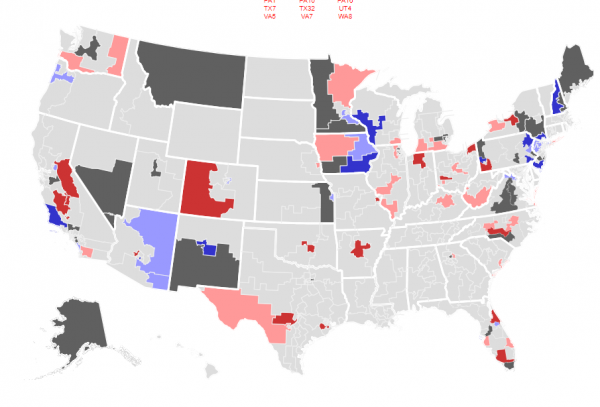 Midterm elections are just a few days away, and the outcome of the elections will determine everything from the legality of abortion, to gun rights, the freedom of religion, taxes and even the impeachment of President Trump.

What do you think will happen on Tuesday?  Vote now!

Putin & Xi Have Red Lines, Too

Who Will Be the Next ‘America First’ President?

Is America Led Today By Anti-Americans?

It is difficult to know what will happen in the midterm election. I have seen articles saying the Republican has a 10 point lead over the Democrat and another article the same day says the Democrat has a 10 point lead over the Republican. I know what I want to happen and that is a complete and utter red tsunami, not a wave but huge tsunami…. I want all the Republicans to get off their lazy asses and get behind DJT. He is one man pulling his weight (for free I might add) while so many in congress/representatives (not all I know) average pay of $174k per year for what? DJT can not govern by Executive Order because the next President will just rescind all his good work. Much like DJT recinded BHO crap….governing with the pen is DANGEROUS. Laws must be passed in order to properly effect change. Where is the wall? Term limits? So much good is happening and I see the work of one man and his cabinet…..

Liberalism,, is FINISHED, Dem, Party as we know it is NO more..
Thank Yopu JESUS

The Mail Bomber was a very effective False Flag engineered by the Democrats. There appears to be no depth below which the Democrats are willing to sink and for this reason I think the Democratic Party should be disenfranchised. Obama made it ok for the MSM to lie to their readers which required no adaptation on their part. For my part, I will trust in Trump, no matter what he does.

We are Canadians AND WE LOVE DONALD TRUMP. He is just what America needs now especially from my point of view as a Canadian. Our PM is a Muslim convert and wants to ruin Canada AND AMERICA. He’s a disgrace and a traitor to the West! You AND we…need a strong American president, Congress and Senate that is NOT DEMONCRAT! Lord bless Donald Trump and all his family and America.Tough times are coming our way (the West) and we all need a very strong President and government to combat Islam and all the chaos that is sure to arrive in North America soon. God bless America!

I agree i think the dem rats planned the mail bomber. They are dirty communists. I hope they don’t win cuz if they do then America will be communist, borders will be wide open., guns taken away, disease rampant from the illegals, more will come turning the U.S. into a Third world nation.

Go President Trump!!! We Canadians are counting on you and are on your side.
Those demonocrats are a far cry from President Kennedy’s caucus and deserve to get wiped out clean like hillary’s computers. Can’t wait for Sessions to begin indicting every one of those treasonous liars. Along with a half dozen Rinos hiding in the swamp too! They know we know who they are..

I predicted that Donald Trump would win the 2016, one year in advance. When The Fake News said, there is a 98% chance that Hillary would win! I laughed.

The Mainstream Bias News: says it is very close. BULLSHIT. Why? Conservative and independents do NOT like to voice their opinions on whom they are going to vote for. People will vote their “pocketbook”, the economy. Racism and the Race Card is finished. Big #’s: 28 to 46% of black will vote Republicans.

Republicans Leads: From Me: This figures points are much higher.

Even with $450 million that Soro’s spent here in the USA and TONS south of the Border. They will lose big time. America will NOT tolerate the democrats/socialist praying for America to FAIL!

GA: Oprah playing the race card violently. Obama, Will; Farrell, and Hollywooders in Atlanta.
FL: This man is racist, anti-police, pro-socialist, and TONS more. Took $5 million from Soro’s.
TX: Beto is good awful! Met twice in El Paso with Caravan leaders in Mexico and from the USA.

Yes, Trump is abrasive, but there are 40+ positive outcomes since he took over.

Trust in God, and fear nothing.

I never thought that In my lifetime I would see a major party in America embrace socialism and display total hate of our country and values. Liberals will go as low as they must to try to acquire power. I detest them. Vote RED. Stop The Socialists.