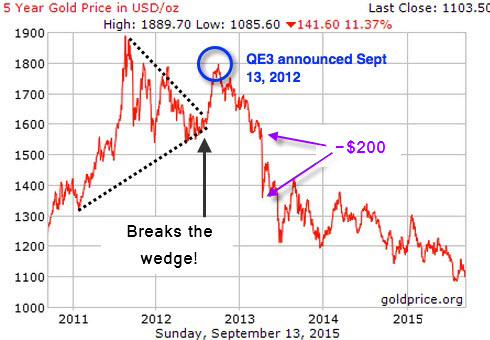 One of our long-running themes here is that the truly historic and massive flows of gold from West to East is (someday) going to stop, for the simple reason that there will be no more physical bullion left to move.

It’s just a basic supply vs. demand issue. At current rates of flow, sooner or later the West will entirely run out of physical gold to sell to China and India. Although long before that hard limit, we suspect that the remaining holders of gold in the West will cease their willingness to part with their gold.

So the date at which “the West runs out of gold to sell” is somewhere between now and whenever the last willing Western seller parts with their last ounce. As each day passes, we get closer and closer to that fateful moment.

This report centers on preponderance of fascinating data revealing the extent of the West’s massive dis-hoarding of physical gold, for the first time, begins to allow us to start estimating the range of end-dates for the flow to the East.

Here’s the punchline: there’s an enormous and growing disconnect between the cash and physical markets for gold. This is exactly what we would expect to precede a major market-shaking event based on a physical gold shortage.

There are only two outcomes that will stop the process of Western gold flowing East, one illegitimate and the other legitimate.

It becomes illegal to sell gold. This is the favored approach of central planners who prefer to force change by dictate rather than via free markets and free will. Unfortunately, this strain of political intervention is dominant in the West, particularly in the US and EU.
The price of gold dramatically rises. A large increase in the price of gold will (paradoxically) cause greater demand for gold in the West and (sensibly) less demand in the East. This is what should legitimately happen given current supply and demand dynamics. But it may not.
There’s always a 3rd option, we suppose: economically carpet-bombing China and India’s financial systems to scare/force some gold back out. Consider such an approach along the ‘economic hitman’ lines of thinking.

This would be done, for example, by having outside interests sell the Rupee furiously, driving down its value and forcing the Indian monetary authorities to defend it by using up foreign reserves to buy the Rupee. Then wait for India to run out of foreign reserves and then casually ‘suggest’ that its government use gold sales to continue defending its currency. India’s leaders would have to find ways to somehow ‘coax’ gold from its citizens. I think we can all imagine the sorts of draconian rules and penalties that desperate governments would deploy in such a situation.

As a side note, I believe this is the same process that was used to ‘coax’ a lot of gold out of the GLD trust since 2012. After enough bear raids on the price of gold, which began somewhat suspiciously almost exactly on the date that QE3 was announced, Western gold ‘investors’ lost interest in the yellow metal, sold their GLD shares in droves, and hundreds of tons of gold were liberated from that stockpile.

What is truly odd from a chart perspective: this hammering down of gold started just after it had broken to the upside out of a textbook perfect triangle, when it looked seemingly ready to head off to higher values: (continue reading)

5 Specific Reasons that You Must Stock Food Today