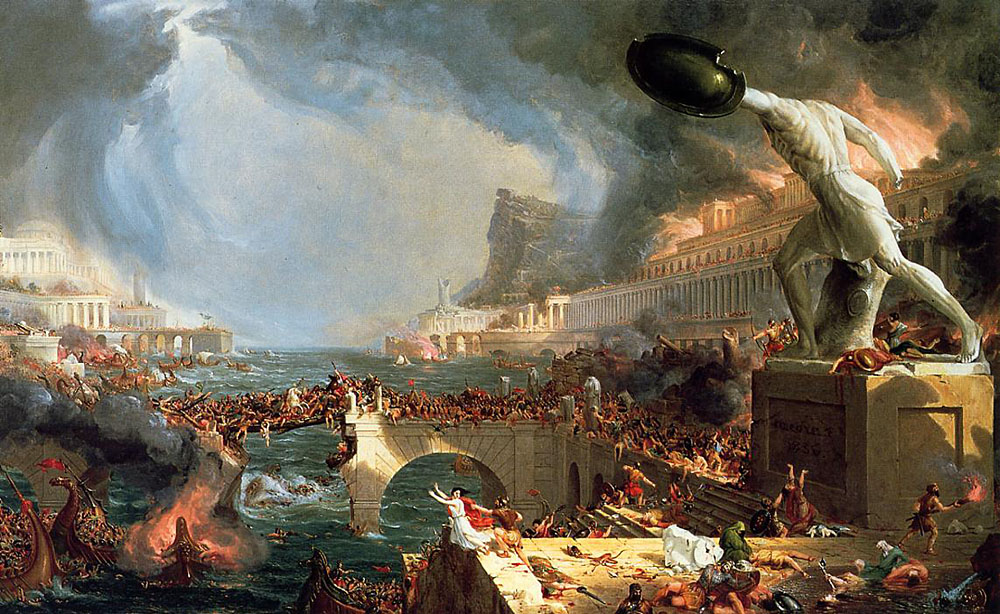 I wrote the first three parts of this article back in September and planned to finish it in early October, but life intervened and truthfully I don’t think I was ready to confront how bad things will likely get as this Fourth Turning moves into the violent, chaotic war stage just over the horizon. The developments in the Middle East, Europe, U.S., China and across the globe in the last months have confirmed my belief war drums are beating louder, global war beckons, and much bloodshed will be the result. Fourth Turnings proceed at their own pace within the 20 to 25 year crisis framework, but there is one guarantee – they never de-intensify as they progress. Just as Winter gets colder, stormier and more bitter as you proceed from December through February, Fourth Turnings get nastier, grimmer, more perilous, with our way of life hanging in the balance.

In Part 1 of this article I discussed the catalyst spark which ignited this Fourth Turning and the seemingly delayed regeneracy. In Part 2 I pondered possible Grey Champion prophet generation leaders who could arise during the regeneracy. In Part 3 I focused on the economic channel of distress which is likely to be the primary driving force in the next phase of this Crisis. In Part 4 I will assess the social and cultural channels of distress dividing the nation, Part 5 the technological, ecological, political, military channels of distress likely to burst forth with the molten ingredients of this Fourth Turning, and finally in Part 6 our rendezvous with destiny, with potential climaxes to this Winter of our discontent.

The road ahead will be distressful for everyone living in the U.S., as we experience the horrors of war, economic collapse, civil chaos, political upheaval, and the tearing of society’s social fabric. The pain and suffering being experienced across the globe today will not bypass the people of the United States. Winter has arrived and lethal storms are gathering in the distance. Don’t think you can escape. You can prepare, but this Crisis will reshape our society for better or worse, and you cannot sidestep the consequences or cruel environment we must survive.

“Reflect on what happens when a terrible winter blizzard strikes. You hear the weather warning but probably fail to act on it. The sky darkens. Then the storm hits with full fury, and the air is a howling whiteness. One by one, your links to the machine age break down. Electricity flickers out, cutting off the TV. Batteries fade, cutting off the radio. Phones go dead. Roads become impossible, and cars get stuck. Food supplies dwindle. Day to day vestiges of modern civilization – bank machines, mutual funds, mass retailers, computers, satellites, airplanes, governments – all recede into irrelevance. Picture yourself and your loved ones in the midst of a howling blizzard that lasts several years. Think about what you would need, who could help you, and why your fate might matter to anybody other than yourself. That is how to plan for a saecular winter. Don’t think you can escape the Fourth Turning. History warns that a Crisis will reshape the basic social and economic environment that you now take for granted.” – Strauss & Howe – The Fourth Turning

The vast and growing Grand Canyon sized gap between the haves and have nots, and the societal implications of an elitist uber-wealthy minority capturing the levers of our economic, financial, and political systems, using that control to further enrich themselves at the expense of the isolated working class, can be clearly understood by following the dialogue between three billionaires chatting on stage at a conference thrown by a convicted Wall Street criminal.

Sheryl Sandberg: “Yeah, so let’s follow up on a bunch of the things we were talking about. Let’s start with income inequality.”

Hank Paulson:“Ok, well.. income inequality. I think this is something we’ve all thought about. You know I was working on that topic when I was still at Goldman Sachs..”

Robert Rubin:“In which direction? You were working on increasing it.”

Hank Paulson then bursts out laughing:“Yeah! We were making it wider!”

Paulson and Rubin spent vast portions of their lives working for the vampire squid on the face of America – Goldman Sachs. This firm represents everything wrong with our social order, as they use all means (legal or illegal) to enrich themselves, whether it be back stabbing clients, double crossing partners, eviscerating vulnerable competitors, robbing the poor, rigging markets, buying influence, placing executives in the highest levels of government, or screwing the taxpayer when their risky gambles blow up the world. Paulson and Rubin are the perfect representatives of the .1% ruling class who protect their interests and the interests of their crony capitalist colleagues at all costs. They truly believe they are shrewder, more astute, cleverer, deserving of the billions they have absconded through rigging the markets, should be running the country behind the scenes, and merit the worship of the lowly peasantry.

The gap between the richest 1% and the bottom 90% has never been wider in history. The previous largest gap occurred in 1929, at the start of the last Fourth Turning. When the real median household income hasn’t advanced in the last 26 years and men’s real wages are where they were in 1971, while CEOs of S&P 500 companies make 331 times their workers and Wall Street hedge fund managers make billions while paying no taxes, you have building anger, disillusionment and calls for retribution.

Some people are waking up to the fact the Ben Bernanke led Federal Reserve and the Hank Paulson/Tim Geithner led Treasury saved their buddies on Wall Street while throwing the people on Main Street under the bus. When Wall Street’s leveraged risk bets pay off, they reap all the riches – as is happening today. When their colossal wagers go bad, the propaganda about systematic failure is rolled out and the American people are stuck with the losses. The goal has always been to revive the stock market and make sure the Wall Street banks continue to generate billions in profits, while leaving the taxpayer on the hook for their failed bets. 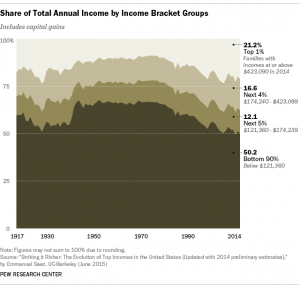 Wall Street and their government crony cohorts. The Wall Street banks colluded with DHS and captured politicians of both parties to crush OWS and subvert the Tea Party. The Deep State’s success in squashing dissent from what they considered the lowly peasants has only been temporarily papered over by the $10 trillion of debt issued to keep the masses sedated, deluded and ignorant about the true nature of the ongoing crisis. The storyline about the 1% is misleading, as many people in the 1% are small business owners, doctors, and professional workers. The true story is the exponential wealth increase of the .1% over the last 35 years as the financialization of the economy has enriched psychopathic, highly educated men who produce nothing but misery, debt, and ultimately social unrest.

Decomposing the 1% reveals the top .1% increasing their share of the national wealth from less than 9% in 1980 to over 21% today. These are the corporate CEO’s buying back their company stock at all-time highs in order to boost their stock based compensation, Wall Street executives who committed the largest control fraud in world history while unabashedly flaunting laws & regulations, hedge fund managers who manipulate and rig the markets while paying no taxes on their billion dollar profits, and billionaire cronies who profit from the military industrial complex and sick care complex by paying off politicians to write laws in their favor and funnel government contracts to them. The sacking and pillaging of the nation’s wealth by psychopaths who are never satisfied with their current vast level of riches, power and control, exposes itself in the tremendous recovery on Wall Street and the ongoing depression on Main Street. 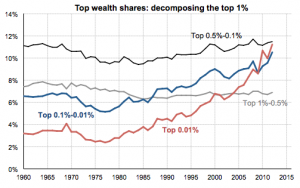 A simmering rage is bubbling below the surface as 20% of American households rely on food stamps to survive, the percentage of Americans in the labor force stands at a four decade low, real household income remains stagnant at 1988 levels, corporate profits have reached record levels while corporations continue to fire Americans – shipping their jobs overseas, and the six mega-corporations representing the mainstream media cover up the truth, mislead the public with propaganda, while celebrating the .1% as saviors of our economy. There is nothing more volatile to societal stability than millions of unemployed men, growing angry and resentful towards the ruling class for their lot in life.

The vast gulf between the haves and have nots will fuel further violence between the classes, as our fraying society is already seething with anger between races, religions, political parties, and genders. The increasingly brutal police state, militarization of local police forces, shaking down of citizens through fines, and unlawful surveillance of our electronic communications, will lead to a backlash against police.

The Black Lives Matter movement, begun after a number of police brutality incidents against black men, has been hijacked by politically motived race baiters and is exacerbating tensions between blacks and whites. The false storyline perpetuated by the media disregards the fact blacks, who represent 13% of the population, commit 22% of all violent crimes and 93% of black shooting victims are shot by other blacks. The white population, abiding by laws, is getting sick of being blamed for the gun violence and lawlessness in liberal ghetto bastions like Chicago, Detroit, Baltimore, St. Louis and Philadelphia. (continue reading)