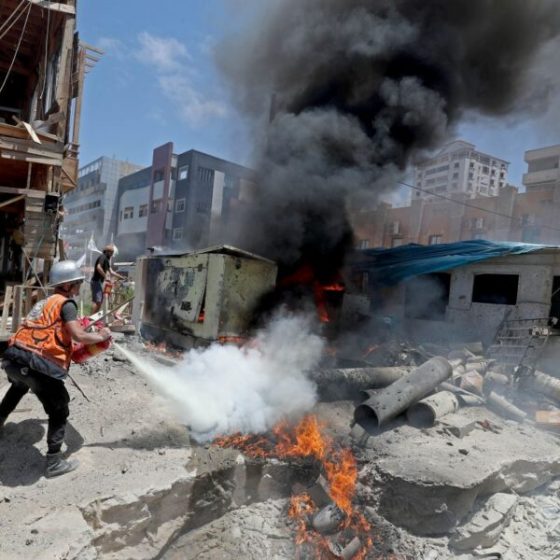 “Everyone, including lesbian, gay, bisexual, transgender, queer, and intersex individuals, should have to live in self-respect,” the State Department pontificates. Everyone? How about Palestinians?

The out of proportion deaths among Palestinians mention a one-sided slaughter. Over 200 have been eliminated– almost a quarter of them kids– throughout the previous week of violence.

It’s a sickening pattern that is seen whenever there is an eruption of dispute.

The horrific death toll will likely escalate as Israeli leaders ignore worldwide appeals for a truce, promising to continue airstrikes “as long as necessary”. The Israelis call it “cutting the yard”. How abominable and twisted is this modern-day Warsaw Ghetto scenario.

Meanwhile, the variety of Israelis killed from Palestinian rockets stands at 10, consisting of 2 children. A 20-fold distinction in casualties reflects an outrageous use of indiscriminate and extreme lethal force by the Israelis.

At yet for the 3rd time in the previous week, the Biden administration has banned global efforts at the United Nations Security Council to call a ceasefire. This is while entire households are being obliterated in airstrikes performed by hundreds of Israeli fighter jets bombing homes with tonnes of explosives in the largely populated Gaza Strip.

Both President Joe Biden and his top diplomat Antony Blinken decline to condemn Israel’s slaughter, duplicating their mealy-mouthed support for Israel’s “right to self-defense”. What’s so best about killing kids in their beds? Or unrelenting airstrikes avoiding even rescue teams from recovering bodies from under rubble? Or bombing a media tower housing worldwide news services? The latter obvious war crime appears to have been carried out to prevent media from reporting on other war criminal offenses.

America stands separated in its outrageous assistance for Israeli criminal offenses. The Biden administration in specific is busted over its rank hypocrisy and virtue-signaling.

Considering that coming to workplace 4 months earlier, President Biden and his team have waxed lyrical about “rules-based worldwide order” and “democratic worths”. They discuss the world being in a historical battle in between “democracy and autocracy” with the Americans being the assumed virtuous ones, of course. Biden and Blinken lecture Russia and China about human rights.

The nebulous virtue-signaling and rhetoric about values are always in the abstract and are laid on with heaps of media propaganda. For instance, we’re supposed to think China is dedicating genocide against its Uighur Muslim population. No proof is offered and the so-called American info is actually disinformation sourced from dodgy ideological think thanks, as recorded by independent reporters at the good Grayzone.

Yet, by contrast, here we have a real-life scenario in which the U.S.-supplied Israeli armed force is causing an attack against Muslims (and Christians) crowded together in the open-air concentration camp referred to as Gaza. And the Americans are busted for the abject frauds they are.

One phone call from Biden telling Israeli premier Benjamin Netanyahu that Washington is going to cut off its yearly $3.8 billion aid would put an end to the blitzkrieg. But that’s not going to occur due to the fact that Biden and Blinken are ardently pro-Israel. But not simply Biden and Blinken. Washington’s royal power forecast in the Middle East counts on Israel. The Israelis can hence do whatever they like knowing that American administrations will disregard to criminal offenses of prohibited profession and continuous expulsion of Palestinians from their homeland.

After Israeli warplanes bombed the media tower in Gaza at the weekend, Antony Blinken spoke to an executive of the AP firm which was amongst those news services attacked. Blinken provided” his steady assistance for independent journalists and media companies worldwide and kept in mind the indispensability of their reporting in dispute zones.”

How’s that for negative virtue-signaling and empty worths? Unwavering support for journalism? Just like Blinken’s “steady support for Israel’s right to self-defense”?

On Monday, while the carnage and dead bodies in Gaza are mounting, the Biden administration provided a declaration marking the “International Day Against Homophobia, Transphobia, and Biphobia”. The State Department said, “the United States has actually endeavored to declare the human rights and basic flexibilities of all individuals, consisting of lesbian, gay, bisexual, transgender, queer, and intersex individuals.” It added, “Everybody should have to live in dignity.”

Everyone? How about Palestinians?

Later today, Antony Blinken is to fulfill his Russian counterpart Sergei Lavrov for their very first face-to-face meeting throughout the Arctic Council top. No doubt, the pompous American will try to lecture Lavrov about “rules-based order” and Western “worths”. No doubt, too, the experienced Russian diplomat will provide Young boy Blinken a bit of education, and ought to tell him to go stick his worthless values on the warheads Israeli fighter jets are letting loose on Palestinian houses.