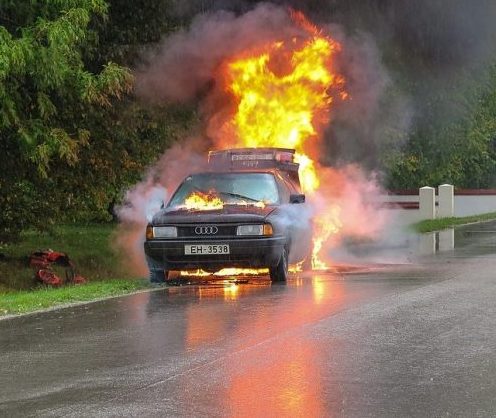 Car disasters make for thrilling action scenes in the movies, but in the real world, they mean life or death. In today’s article we’re going to talk about three of these scenarios and the dos and don’ts of each. As much as you don’t like to think about it, next time, it could be you. And as in all survival situations, learning the proper emergency protocols and preparing yourself is vital.

Put of the three, this scenario is probably the most likely to occur. When you feel your brakes go out, block out the panic response and concentrate. If you start frantically turning the steering wheel, flooring pedals, and slamming down your emergency brake, you’re going to turn a situation deadly that might have otherwise been survivable.

The ideal response to brake failure consists of multiple small moves. First, take your foot off the accelerator. Switch on your emergency lights, quickly pump the foot brake (in case it manages to connect), start to change down through the gears, and apply your hand brake in staggered, gentle jolts; don’t apply full pressure until you’ve slowed enough that you know you won’t skid across the road.

If time is a luxury you don’t have, remove your foot from the accelerator, start switching gears, and use your handbrake as instructed above. Throughout all of this you need to be on the lookout for opportunities to pull off the road: escape lanes, a soft bank, a turn-off with an uphill slope, etc.

If collision can’t be avoided (say you’re going down a hill), try and brush the side of the car alongside a hedge or a wall to slow yourself down. If this proves futile or impossible, use the car directly in front of you, rear-ending it as gently as you can. Before you hesitate out of guilt remind yourself: all of the alternatives are worse. Flash your lights and use your horn to alert the driver(s) ahead of you.

Don’t ever choose something solid and immovable to bring the car to a stop. Choose something with more give (a hedge, bushes, a fence) as opposed to a tree or a wall, which would result in significantly more damage.

Counter-intuitive as it may be, if you aren’t wearing a seatbelt, you’re actually better off not trying to brace yourself. Instead, put your arms around your head and twist your body toward the collision point and away from the steering wheel. Bracing against something will almost always result in your body being flung violently (usually into the steering wheel, which essentially becomes a battering ram to your ribcage) when the car comes to a sudden stop, ending in worse injuries than if you’d ‘gone with’ the collision. Back seat passengers should protect their heads and lie against the backs of the seats in front of them.

Lastly, leaping out of a moving vehicle is extremely dangerous and shouldn’t even be considered unless you’re rapidly moving toward a cliff, a drop off, or something else you’re guaranteed not to survive. If you find yourself in this situation, bend at the waist, tuck your knees into your chest, place your hands up by your ears, and roll toward the ground. Don’t resist the impact- stay rolled up as tightly as you can until you come to a stop.

Best case scenario: you escape the car before it sinks; it’ll take some time for the vehicle to be completely underwater. The extreme water pressure on the outside of the doors will be immediate, though, so don’t bother trying to open them. Roll down the windows and climb out. Do not try to save anything other than people.

If it’s too late for that, immediately roll up all the windows and deactivate any locks you have on the doors (don’t forget child locks). Both of these functions are likely to stop working once the car is underwater.

Have all the passengers stand with their heads as near to the roof as possible and hold toddlers/babies up high. As the car begins to descend and fill with water, air will be trapped at the top of the vehicle. Once the car is almost completely full, the water pressure inside and outside will be nearly equalized. Open the doors, have everyone using the same door link arms, and swim to the surface.

Note: If you can help it, always park alongside water, not heading towards it. If you have to park facing the water, leave the car in reverse with the handbrake on, if you’re facing away, use first gear and the handbrake.

If your manual breaks down on an unmanned level crossing, use the starter motor to jerk the car clear of the tracks. Unfortunately, this method won’t work for an automatic.

If a train is rapidly oncoming, evacuate the car and run at least 50 yards away- travelling at high speed, a train could throw pieces of wreckage and shrapnel a fair distance.

If there’s no train in sight, or if it’s still far enough away to give you time, do everything you can to avoid a collision entirely. Try to push the car out of the way, use the emergency telephone (if there is one) to warn signalmen down the track, and if all else fails, walk up the track- well off to the side- toward the train with a car blanket or something brightly colored to get the driver’s attention.

Don’t fall into the trap of believing that this could “never happen to you”; too many desperate situations end in the loss of lives that could have been saved had the victims been properly prepared. So educate yourself and prepare for everything. When the time comes, you could be the only reason your loved ones make it out alive.

Surviving The Aftermath Of An Inclement Weather Pile-Up

Mouse Proofing Your Home Before the Cold Months

Cut Your Costs With Soy Candles

Brighten Up Your Candles With This Simple Trick