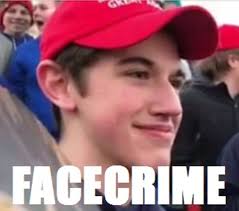 Readers have no doubt observed the national scandal unfolding after a Native American man approached a group of Catholic high school boys who were praying on the steps of the Lincoln Memorial while they waiting for their bus.

The man-a Leftwing political activist-walked up to one young man and began banging his drum aggressively. Initial footage was cropped by the MSM to make it appear that the student was somehow ‘intimidating’ the Native American.

The MSM, celebrities and even many ‘conservatives’ began attacking the students, with some calling for them to be tortured and even executed.

The deterioration of our society has become so advanced that we are now playing a role right out of George Orwell’s 1984:

In any case, to wear an improper expression on your face (to look incredulous when a victory was announced, for example) was itself a punishable offence. There was even a word for it in Newspeak: facecrime, it was called.” (Chapter 5, Part 1)

So I ask readers to vote in our latest poll:

The reason I voted they are both victums is that MSM have forgot their purpose is tell the truth, not their slanted version. We the people of this country by and large have forgot, that we have forgot that GOD requires us to love our neighbor as we love ourselves.. The love in this country has been lost, or should I say we have given it away.

Yes, we should love oneanother as God directed.Its the MSM rable rouser who is taunting and acting as a ass. Don’t blame the white boys for standing their ground.