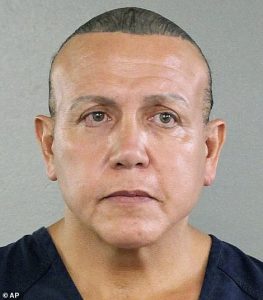 mail to a number of left-wing elected officials.

The accused has a long arrest record and a history of drug abuse.  His social media presence indicates he is a Trump supporter, while other online records indicate he is a Democrat.

The poorly constructed bombs and the bizarre timing has led many to believe the entire thing is a ‘False Flag’.  Others claim he’s mentally ill.

Still others believe his is perfectly sane and a product of crazy, right-wing fanatics encouraged by Trump towards violence.

Let us know what you think in the poll below:

What Do You Expect for TEOTWAWKI ?

I believe he was set up. I do not believe he sent or made those pipe bombs..

There is apparently no depth below which the Democrats are willing to go. This was so low that I think the Democrats should be disenfranchised as a political party for the next two years. They lied to everyone in the country, knowing that CNN would peddle that lie and the correction would be buried.

He was programmed by deep state operators, just like Timothy McVey.

I think this is a Reverse Psychology maneuver. He doesn’t LOOK like he would be a Conservative. It states that he had postings on Social Media that he was a Democrat previous to this now Conservative profile, if it’s a legitimate finding at all. I think he is either mentally ill or strung out on drugs, or perhaps BOTH! I do feel that “IF” he did do it, it was a money bet to see if he can shake things up Politically by pretending to be a Conservative to upset and put fear into people and influence the election polls. That way, they can further accuse Trump and his supporters as HATEFUL People. So far, the mentally ill violent ones have surprisingly been Democratic; The party who is supposed to be Peaceful and Fair! Today, things are BACKWARD! We’ve all been misguided. I think this man took money or a bet to do this not only to sway voting, but I feel the accused bomber also did it (if he was paid) to buy drugs to support his habit or did it on his own accord while strung out mentally or chemically. Obviously, he is not an expert at making such devices, so I believe the intention was to put fear into the recipients and their supporters to thwart voting Republican based on this insanity, is why I feel a Reverse Psychology theme was played out here.

Everyone is accountable for their own behavior. So too with the bomber. That is to say:

1. Anything he was told or heard from anyone is not responsible for his behavior. In the abscence of payment all else remains only suggestions or influences and not causal. He and he alone is responsible his behavior.

2. If payment was involved then both are guilty. However, the one making the payment is additionally guilty for taking advantage of the bomber’s limitations of intelligence, mental stability, financial need etc.

3. The accused bomber’s inconsistant past suggest great mental/confusion and/or mental instability. His inability to know “right” from “wrong” coupled with his access to potentially deadly technology suggests he should be under close supervison. Given his age he should be under very close supervison for the rest of his life. He should be institutionalized at least for 10 to 15 years and closely monitored until death or incapacitation.