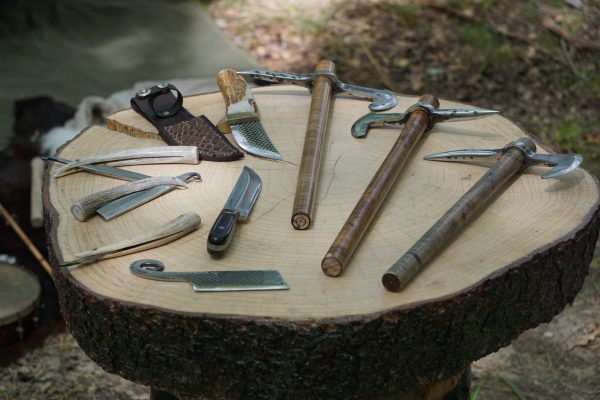 This is a common question that pops up when preppers think about self-defense. Using a firearm seems extremely violent and final. They’d rather take their attackers down and wait till the police arrive. It seems more humane.

The truth of the matter is that reality is very different. Every prepper should own a firearm; there’s no two ways about it. If criminals carry guns, you should too, or you have no chance against them.

This is especially true for women. You need every edge that you can get, and a gun commands instant respect- just flashing it can scare off a potential attacker. So really, a firearm can be an effective deterrent before it’s a lethal weapon.

The same doesn’t apply for knives or other non-lethal weapons. In fact, if you’re using a knife for self-defense, you might end up causing more pain if your attacker engages in a struggle with you instead of running away. Worst-case scenario, the criminal will acquire your knife and use it on you.

So just to be clear, nothing really beats a firearm. Non-lethal weapons and unarmed combat skills will ever provide you the same assurance as a gun. However, if you insist on a ‘more humane’ alternative, the weapons listed below are among the most practical. Let’s take a look at them.

These are extremely effective if you’re already close enough to your attacker and can catch them by surprise. They work through clothing and can incapacitate an attacker long enough for you to bind their wrists and ankles with cable ties.

The limitation is that you need to get close enough to use them and in some cases, the aggressor keeps moving forward. If you’re not already within arm’s reach, don’t intentionally get closer so that you can use it. Maintain as much distance as possible.

The downside to this option is that if there are two or more people trying to break into your house, one taser is not going to be enough.

Effective, but you need to be really close to the attacker. These are best used in situations where you need to inflict discomfort and pain on your attacker (who, again, is already within arm’s reach) so that you can escape. The spray will cause their face and eyes to burn but will not permanently injure them.

If you want to use a knife as your choice of self-defense, it’s best to be trained in it. Filipino martial arts like Eskrima will teach you knife attacks and defense techniques. However, you still need to get close to your attacker and in a fight, anything is possible.

You might end up getting cut if the knife slips. There could be blood all over the floor causing you to slip and fall. It gets very messy and is nothing like what you see in the movies.

These are only effective if you take your opponent by surprise or you manage to get a good strike. These weapons are unwieldy to begin with, and women may struggle to use them because of the upper body strength required to deliver a blow powerful enough to bring down your attacker.

This weapon requires prolonged contact with the opponent until they go down. There’s also a chance that you might shock yourself if there’s a struggle and the stun gun comes into contact with your skin.

Hand-to-hand combat is only effective if you’re well-trained. Expert martial artists with lots of real world fighting experience can easily take down two or even three opponents. However, most people don’t have this level of skill. It requires lots of practice, strength, and stamina.

There’s also the possibility that the attacker has a gun, which immediately rules out unarmed combat on your part unless you are close enough to reach for the gun and execute a disarming move. Even then, you must be confident and fast, and you must do it right or the gun could go off and injure you or someone else.

If you totally miss the move, you end up aggravating the attacker who just puts three bullets in you. To say the least, it’s risky.

To sum it up, while non-lethal weapons can be effective at the right time or place, as a prepper who wants to protect your family, home, and yourself, a well-used firearm is always the best option. When violence is imminent and you’re under attack, you can always rest assured that your gun will respond more quickly than a 911 call. Stay prepared.